NASA exhibit now open!
The long-awaited NASA traveling exhibit from the Marshall Space Flight Center is now in place in the Union Museum of History and Art, 211 N. Main St., Farmerville, Louisiana.  Come see the intriguing display of fabulous images and displays about America's space program, see live stream video from the International Space Station, watch a fascinating documentary of the Apollo program, take photos in the astronaut photo booth, enter your name in the space items drawing, and add your thoughts to the "Leave a Message on the Moon" board.
Since it began 64 years ago, the National Aeronautics and Space Administration has made astounding achievements that have changed life here on Earth forever. Today NASA is still reaching for the stars!
Bring the kids to see this exhibit! One of them may travel into the far reaches of space some day.
This exhibit will be on display in Farmerville through August 30.
FREE ADMISSION (but donations are appreciated)
A big THANKS to the Union Parish Tourist Commission for sponsoring this exhibit and events.

Greg Andrews
SciPort Planetarium director to speak  Aug. 11 in Union Museum
Love all things space? Then come hear SciPort planetarium director Greg Andrews share his enthusiasm for NASA's space ventures on August 11, at 5 p.m. in the Union Museum of History and Art. FREE admission!  This program is in conjunction with the NASA exhibit on display in the museum July 26-August 30.
Greg has worked at Sci-Port: Louisiana’s Science Center (Shreveport), since February 2005. He graduated from Louisiana State University – Shreveport (LSUS) and received a B.S. in Physics. He became Astronomy Program Leader at SciPort in January 2006 and Planetarium Manager in 2010. His responsibilities include the operation of the Sawyer Space Dome Planetarium, creation and development of Planetarium programs, management and training of the Planetarium staff, and the maintenance and operation of the Averett Solar Observatory and associated telescopes.
Greg regularly communicates space science and astronomy-related information to school groups and general visitors through planetarium presentations activities, demonstrations, and presentations carried out in other parts of the Center.

"3-2-1 Blast Off!" workshop for youth slated Aug. 13
Young people ages 9 to 18 are invited to come enjoy fun with rockets in a free hands-on workshop, Saturday, August 13, at 9 a.m. at the museum.  The activities will be safely led by educators Erin Doucet and Mike and Lyn Murphy.  This event is in conjunction with the NASA exhibit in the museum from July 26 to August 30.

Enter to win 8' x 12' portable building
Bayou Portable Buildings in Monroe has generously donated a brand-new custom-built building to be raffled as a benefit for the Union Museum of History and Art AND  for the Union Arts Council.  Raffle tickets at $5 each are available for purchase at the museum, 211 N. Main Street, Farmerville, where you also can see the building first-hand.
​     Drawing for the prize will be September 22 during the International Tasting Tour.  You do not need to be present to win.

International Tasting Tour slated September 22
A few individual tickets are now available for the museum's first-ever International Tasting Tour fundraising event on Sept. 22.  This fundraiser for the museum is a massive undertaking by a team of dedicated volunteers headed by Claudia Wade. The bright colorful celebration will be in the Willie Davis Recreation Center in Farmerville, and will feature food specialties from around the world, silent auction, raffles, cultural dances and music. Featured entertainer will be Kennya Padron, internationally known Latina recording artist.  For ticket information, call the museum at 318-982-8020.
Several regional restaurants, caterers, and chefs have already committed to providing foods from around the world.
​
Donate an item to the museum's silent auction
Local businesses, artists, and crafters are asked to consider donating an item for the silent auction that will be part of the International Tasting Tour on September 22.  This is an opportunity to get your name out there to the more than 300 attendees at this gala event!  Click the button below to learn more!
Silent Auction Donation 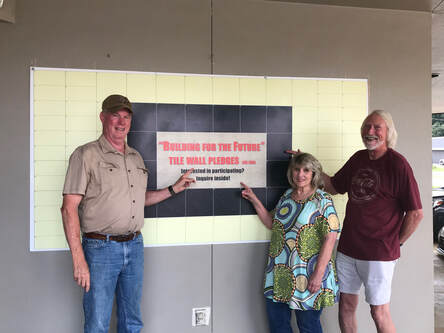 Museum board members Tom "Tuffy" Fields (left), Carolyn Hanry, and Ramsey Hallman display the replica of the honored contributors tile wall. Those who pledge and contribute $750 or more during the campaign will have a tile inscribed as they wish.
"Building for the Future" --
Museum seeks pledges for capital campaign
Union Museum of History and Art needs to raise $200,000 over the next three years in order to purchase the building it now occupies at 211 N. Main Street.  Building owners Paul and Kelly Coburn are generously allowing the museum to reside here rent-free for five years (started early in 2020).  BUT, early in 2025, the museum must be prepared to buy this building...or vacate it.
SO, we are asking YOU and other enthusiasts to help keep the museum a permanent institution in Union Parish.  This museum is a 501(c)3 non-profit charity, so all donations are tax-deductible to the full extent of the law.
In the "Building for the Future" capital campaign, we are asking people to make a pledge of support from now until the end of 2024.  Pledge payments can be made monthly, quarterly, or annually...any way you like.  Payments can be set up through your bank or credit card or you can send checks.
SPECIAL FEATURE:  Those contributing $750 or more to the capital campaign will be honored with a beautiful inscribed tile on the "Wall of Gratitude" to be permanently mounted near the front door of the museum.  These tiles will be either 8" x 8" ivory marble or black granite, or 4" x 8" ivory marble (depending on donation amount).  YOU will choose the wording for your tile.
If you are interested in this opportunity, please call the museum office at 318-982-8020.  We thank you in advance for your support.  Generations into the future will call you blessed. Lottie Harty at the entrance of the archaeology research center named in honor of her late husband, James Harty
Museum launches First People of Union Parish gallery and the James Harty Memorial Archaeology Research Center
The “First People of Union Parish” permanent exhibit and the James Harty Memorial Archaeology Research Center were officially opened Saturday, June 26, with a festive open house in the Union Museum of History and Art in Farmerville.  Some 170 people gathered on Archaeology Day to witness the ribbon-cutting by Lottie Harty and enjoy the many activities.  A highlight of the day was an illustrated talk by archaeologist-author Jeffrey Girard, who discussed the earliest inhabitants of this uplands region, especially the Caddo cultures from the west and Lower Mississippian cultures from the east.
Larry Pixley of Bernice demonstrated the many complex tool-making techniques used by prehistoric cultures.  Amy Estep prepared Indian fry bread for the crowd and Larry Estep performed music with his Indian flute.  Several local enthusiasts brought in their archaeological “finds” for Girard and other experts to identify.
The research center was named in honor of James Harty of Bernice, as he was a devoted avocational archaeologist, teacher, and coach.  He heavily researched several prehistoric Indian sites in Union Parish and beyond, with four of his articles published in Louisiana Archaeology magazine.  “Coach Harty was an enthusiastic and highly respected researcher in the field of archaeology,” says Tom “Tuffy” Fields, coordinator of the museum’s “First People” collection.  “We miss Coach.  So we hope this research center will honor his memory.”
The exhibit currently includes artifacts and other items from the James Harty Family, Cal Colvin, David Chrisman, Wayne Abercrombie, Carol Jo Johnston, Larry Pixley, Michael Christian, Gene BeDoit, Tom Fields, Richard Wolf, and Jean and Steve Jones.  Artist Hooshang Khorasani has six large paintings of plains Indians on display.  David Taylor’s mural, “Day’s Work,” which will be on permanent display, depicts Caddo Indian house-building and pottery-making.  The museum is grateful to these entities for making the day possible:  Tom and Bonnie Fields, Claiborne Electric Operation Round Up, the Louisiana Endowment for the Humanities, and the National Endowment for the Humanities. The views, findings, conclusions or recommendations expressed in this program do not necessarily represent those of either the Louisiana Endowment for the Humanities or the National Endowment for the Humanities.
The public is invited to visit the “First People of Union Parish” permanent exhibit, in addition to other rotating and permanent displays.  Admission is free.  Hours:  1 to 5 p.m. Tuesday-Friday; 11 a.m. to 1 p.m. Saturday.  For more information, call 318-982-8020 or visit www.unionmuseumofhistoryandart.org.
Union Museum of History and Art is the proud recipient of CARES Act funding from the National Endowment for the Humanities (via the Louisiana Endowment for the Humanities) and from the National Endowment for the Arts (via the Louisiana Division of the Arts).

​THANK YOU!
A hearty thanks to all those who supported and attended the first-ever Union Parish Folk Life Day on Saturday, May 1, on the grounds of Discovery Place-Union Museum of History and Art. The museum collaborated with the Union Parish Library and The Dance Studio of Union Parish to plan a fun-filled day of folk music, dance, crafts, and food.  While we don't know exactly how many people attended this event, it is believed that around 300 or more jammed the site, enjoying the sunny day and exhilarating events.
We are SO VERY grateful to these organizations that sponsored Folk Life Day, and made it possible to present a family-friendly event that brought history alive.  They are The Town of Farmerville, Union Parish Tourist Commission, the Union Parish Library, Bare Necessities Luxury Mobile Restrooms, and Thomas Nursery and Feed.
Here are a few photos:
​

Union Museum of History and Art gratefully acknowledges arts grants​
​     Several projects of the Union Museum of History and Art have been supported by grants from the Louisiana Division of the Arts, Office of Cultural Development, Department of Culture, Recreation and Tourism, in cooperation with the Louisiana State Arts Council, as administered by the Northeast Louisiana Arts Council, Inc. Funding has also been provided by the National Endowment for the Arts, Art Works.”
Early settlers, 1540-1850
For educators
"First Friends" of the Museum
Sincere thanks go to these individuals and organizations that launched the museum in 2014
by underwriting the gallery construction expenses.


The Museum is forever indebted to the Union Parish Chamber of Commerce, which began the museum idea as a special study project in 2011.  The Chamber's Board of Directors enabled the concept to become a reality, and today the Union Museum of History and Art is an independent 501(c)3 non-profit organization.  For its first five years, the Museum was housed in the Chamber of Commerce building; in March 2020, it moved into the building at 211 N. Main St. , Farmerville.